Abstract: Huge dinosaurs were able to amble around and even fly because gravity itself was much less in the past. Everything was huge back then - even the plants.
The reason being: gravity was so much weaker things grew to a tremendous size.
Some dinosaurs (pterodactyls) could even fly (anything that size today would be grounded). There might have been an asteroid impact. But that is NOT what killed the dinosaurs. There were multiple extinctions - millions of years apart - impact gets ruled out as the sole reason .

~~~~~~~~~~
Bye Bye Birdie
~~~~~~~~~~
Take a good look at the Quetzalcoatlus (flying reptile (dinosaur)) in the picture below.
It is easy to see if they were alive today they would NOT be able to move around nor fly.
The only possible explanation is: the strength of gravity must have been much less in the past. 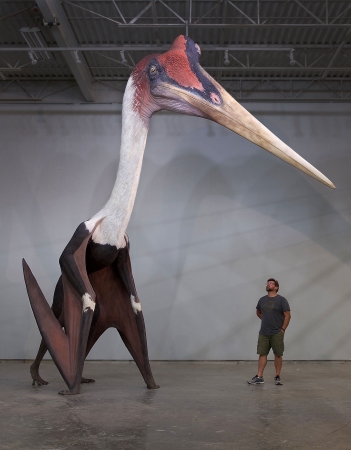 There are two possible explanations:

● 1: The Earth must have been much smaller is size giving it less gravity. The Moon for example has about 1/6 the gravity of the Earth.
● 2: The Earth was spinning much faster. Centrifical force [sic](sp)* counteracts gravity.

Smaller size? There might have been an event where a much smaller Earth was hit by something the size of mars. That could have created a larger Earth and the Moon.
But the giant-impact hypothesisis "Thea" is claimed to have happened 4.5 billion years ago NOT millions like in the time of the dinosaurs 245 and 66 million years ago, so that cannot be correct.

Spinning faster? No, I did some digging and found out if the Earth were spinning faster it actually would result in less gravity - but the Earth would have had to be spinning 3 or 4 times faster than now to make even a slight difference.
So, that cannot be the reason either.

The Third Possibility
Guess what? There is a third possibility, and it was already mentioned - the strength of gravity must have been much less in the past. That one works just fine.
Note: this is NOT like going to the Moon and there would be less gravity because of the smaller sized Moon.
This time gravity itself is less.
Meaning: the strength of gravity on the Earth as it is right now could have been as weak as it is on the Moon. Earth with Moon gravity.

The Earth would be the size it is now but with much less gravity.

Note: The moon is only an example because everyone knows it has less gravity.
Notice the last sentence: I said "much less gravity" I do not know the exact amount and there wasn't an exact amount. With every pass through the galactic plane the amount changes.

Thread length [L] and mass [m] are unchangeable constants.
Variable thread tension [T] will also vary the speed of light [c] and vary the tension which determines the strength of gravity.

Excess threads = greater tension = stronger gravity
Excess clumps of threads are called dark matter and can increase gravitational strength. It would be like having a 6 string guitar with a certain amount of tension, then changing it into a 12 string or 18 string guitar. It would be the same guitar, and the strings would be the same length, but the tension from the excess amount of strings could snap the guitar neck.

Gravity is a force, it is thread network tension: T = mc^2 / L
The thread lengths [L] between objects stay the same but there are more threads.
That increases the mass [m] and the increase of mass creates more tension and stronger gravity.

Is there anything that could add a massive amount of threads to the thread network at specific intervals?

Meteor Impact?
No, The dinosaur extinctions did NOT happen all at once (like most people think (so a meteor impact cannot be the reason)).
There were multiple extinctions and they line up perfectly with the solar system and Earth passing through the disc-shaped galactic plane of the milky way.
The large dinosaurs like the Brachiosaurus went first. Then during the next pass through the galactic plane all of the rest were snuffed out (that's a completely different period).

That means every time the solar system and Earth pass through the galactic plane: they pick up a massive amount of threads. The excess threads will increase the strength of gravity - and it can happen more than once.

Working that in reverse means gravity would be much less in the past and huge dinosaurs and or flying dinosaurs are possible.

It also works if you are in the Einstein camp:
● Less spacetime = less curve = less gravity.

Don't forget: spacetime is supposedly being dragged, that means it is made from something (as opposed to being magic)
Magic: Space (nothing) + Time (the speed things happen (not tangible (nothing))) = "Spacetime" a fourth dimensional curve responsible for gravity.

Galactic Halo?
Note: Dark Matter threads would absolutely be pulled into the galactic disc and NOT be forming a spherical "halo" around a galaxy - the halo idea is dumb.
Dark Matter interacts with mass and creates excess gravity.
Why would dark matter be floating around a galaxy in a halo and NOT be pulled into the massive amount of gravity happening in the disc? I cannot believe they think there is a halo - that is dumb.
The only way there could be a halo is if there were so much dark matter in the galactic disc that it caused an overflow. But the massive amount of "dark matter" (the high concentration) would still of course be in the galactic disc. And any overflow would NOT form a halo anyway.
A halo is a precise structure, meaning there would be interaction with whatever formed it, and if it is interacting that means it would be pulled into the disc.
If there is an excess: it would be completely random distribution. Any thread unit group ∗ (dark matter) above or below the galactic plane would be pulled into the plane by gravity coming from the stars ●
It is something like a triangulation pull but there are billions of "triangles."
Note: this is NOT like a Lagrangian. In the depiction above: everything would be moving to the left or right in unison. So, the gravity of the stars would pull dark matter down into the plane.
The Lagrangian is different. Everything in the picture above would be moving straight down and that would mean anything in the triangular spot above would be dragged but never be able to catch whatever is dragging it.
And the triangulation is NOT that important. Stars would simply tug anything above or below them into the plane.

It would take 25 giraffes to make one Brachiosaurus. It is easy to see the Brachiosaurus would NOT be able to even move unless there was much less gravity.
Elephants are the maximum weight for a land creature and they have a have time getting back up if they are laying down.

~~~~~~~~
Debunkery
~~~~~~~~
Claim: The dinosaurs had very light, bird-like bones. That enabled the huge size.
Answer: No, look at the brachiosaurus. There is a massive amount of weight.
Light bones would snap like tooth-picks if they had to support that weight.

Claim: There was an abundance of oxygen during the time of dinosaurs. That enabled the huge growth
Answer: That is irrelevant. The cause of growth does NOT matter. The question is: how could they walk around and or fly when they are that huge size. That is the thing that was impossible.

● Oxygen allowed dinosaurs to grow to a huge size.
● Weaker gravity allowed them to exist at that huge size.

Those are two different things.
Dummies are arguing by conflating them.

I have read everything I could find on it.
All of the arguments against weaker gravity are wrong, dumb, or irrelevant.


Tension is a Force. Gravity is a Force. A Newton is a Unit of Force.
Velocity is a vector but the dimensions are the same as speed = [L]/[T]
The words like "speed" are only names of what the dimensions on the right are called.
You cannot have anything like pure length, force nor energy. (Pure mass? Yes, that is OK?)

Notice mass [M] is not equal to energy [M][L^2]/[T^2] ...the vibration is missing
Here is what Einstein's (actually Émilie du Châtelet's) famous equation really looks like...

If you hear anyone claim mass and energy are equal or they are interchangeable or they are flip-sides of the same coin: this is what they are actually saying...

● The thread network has tension on it, that is a pulling force: Gravity
● The network is vibrating, that is energy, it's unseen: Dark Energy
● The network itself is a substance: Dark Matter.


Here is a regular thread tension formula:
Tension = velocity squared x mass / Length.
If we plug in c and rearrange we get the one-inch equation for gravity, light, energy and time...


Centrifical force [sic](sp)*
Yes, I really do not like saying centrifugal nor centripetal.
I grew up saying "centrifical" and I am NOT changing.


So, now you know what really killed the dinosiars.
Remember: Most of the ideas presented here are my original ideas. siblr
If you steal my original ideas: I will come to your house.
Here is a regular thread tension formula...
Tension = velocity squared x mass / Length.
If we plug c in and rearrange we get the one-inch formula... TL = mc^2
http://www.mccelt.com/the-one-inch-equation-to-explain-all-physical-laws.php

The threads unit itself would be just the grey threads in the picture (no color and a lot thinner of course).
It would fit perfectly inside of a dodecahedron.
Actual thread length is about one Ångström and it is fine enough where 10 threads (20 radii) could curl-up into the size of a neutron.