The thread group itself would be just the grey threads (or strings) in the picture (no color and a lot thinner of course).
It would fit perfectly inside of a dodecahedron.
Actual thread (or string) length is about one Ångström and it is fine enough where 10 threads (20 radii) could curl-up into the size of a neutron.
DARK MATTER & DARK ENERGY = THREAD NETWORK & TENSION

"About 95% of the cosmos cannot be seen by any telescopes, because it is made of mysterious "dark matter" and "dark energy" that do not interact with light" -- BBC Earth

The only way that could be true is if dark matter and dark energy conveyed light. And that is actually true but they do not think that.
If something was filling space and it DID NOT convey light: it would be like smoke and you could NOT see through it.

NOTICE: It is also impossible for something to NOT interact with light.

If light is traveling towards dark matter... 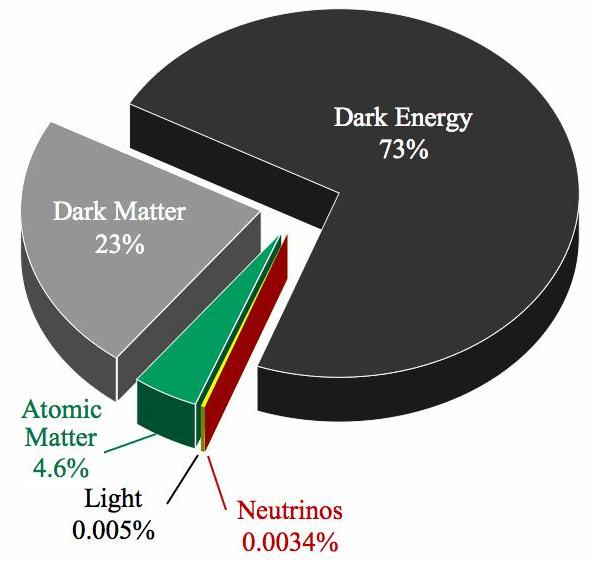 ...It has to absorb, reflect or pass through (convey) it.
There is nothing else. Bouncing off it is reflection..
If it is blocking light: it would not be invisible.
Most stuff written about mainstream physic is just nonsense.
Can anyone tell me what "non-interaction" would entail? No, you cannot. That is impossible.

The pie chart picture actually infers space is just about solid with mass since energy would have to be made from something.
Energy is only a vibration on a substance or movement of substance.
What is the substance? Anything other than magic.

Dark Energy and Dark Matter would both have to be made from something.
"Dark Matter" might NOT actually be a known substance but it at least has to be something -- it is quantum threads. The clumps around galaxies and other spots are excessive amounts.
There is NO such thing as pure energy. Energy is NOT a thing in itself -- "energy" happens on something else, in this case it is the vibrations of tensioned quantum threads.
The vacuum energy of (actually non) empty space is not a vacuum, it is tension on the thread network.
It also explains Dark Energy... everything is being pulled on (not pushed) equally from every direction (coming from infinity).
If there are two end points (any type of matter, planets or anything) that creates a stronger connection and they pull together -- that's gravity.

Tension is a Force. Gravity is a Force. A Newton is a Unit of Force.
Velocity is a vector but the dimensions are the same as speed = [L]/[T]
The words like "speed" are only names of what the dimensions on the right are called.
You cannot have anything like pure length, force nor energy. (Pure mass? Yes, that is OK?)

If you hear anyone claim mass and energy are equal: this is what they are actually saying...

Of course that is wrong

Got it? Dark Energy would have to be made from something. Specifically a vibrating substance.
There is NO pure energy even if it is dark.
And if a matter substance is filling space and it is "dark" or invisible that means it is conveying light.

What could this be? Could space be filled with an unseen matter and a vibrating energy substance?
Yes, It is Quantum Thread Theory. Space is NOT empty. There is an all encompassing lattice-type gravity-centered thread network in space.

● The thread network has tension on it, that is a pulling force: Gravity
● The network is vibrating, that is energy, it's unseen: Dark Energy
● The network itself is a substance: Dark Matter.

~~~~~~~~~~~
RECAPITULATE:
~~~~~~~~~~~
Space is NOT empty. There is an all encompassing lattice-type quantum thread network in otherwise empty space. It is gravity centered -- Einstein called it Space-Time. Otherwise known as the Fabric of Space. (yes, the fabric of space must actually be made from something)
A good 2-D model would be something like a spiders web made of the finest web-silk-thread filament. Now imagine a 3-D web.
It is made from individual yet connected quantum threads and of course the network has tension on it (that's where gravity gets its pull). The speed vibrations travel through the web is the speed of light (light is a just a vibration travelling in a quantum thread network)

NOTE: T = Tension, inside brackets [T] = Time
Here is a regular thread tension formula...
Tension = velocity squared x mass / Length
If we plug in c and rearrange we get the one-inch formula for energy and light...

Now we know where gravity, light, energy and time come from and why light travels at c.
Tesla was correct...
"There is no energy in matter other than that received from the environment." – Nikola Tesla

Got it? An Eensy-weensy spider could make an huge web out of almost nothing.
The web itself would be the tensioned fabric-of-space, the construct of gravity, dark matter.
The vibrations of the web are energy and light. The speed the vibrations traverse the web is the speed of "web" (light).
The amount of actual substance needed to make the web is minuscule. If the web were balled-up it would be a dot and that is regular matter.
Ratio-wise: A small amount of regular matter (that's balled-up web threads) is equal to a huge amount of dark matter (web) and dark energy (web vibration).
P.S. Remember: Energy can also be TL = Tension times Length.

The thread group unit itself would be just the grey threads in the picture (no color and a lot thinner of course).
It would fit perfectly inside of a dodecahedron.
Actual thread length is about one Ångström and it is fine enough where 10 threads (20 radii) could curl-up into the size of a neutron.