The particle itself would be just the grey threads (or strings) in the picture (no color and a lot thinner of course).
It would fit perfectly inside of a dodecahedron.
Actual thread (or string) length is about one Ångström and it is fine enough where 10 threads (20 radii) could curl-up into the size of a neutron.
GRAVITATIONAL WAVES CAN ONLY BE COMPRESSION WAVES

"Gravitational waves are 'ripples' in the fabric of space-time caused by some of the most violent and energetic processes in the Universe. 'waves' of distorted space would radiate from the source (like the movement of waves away from a stone thrown into a pond). Furthermore, these ripples would travel at the speed of light " -- LIGO

Sorry, that is impossible

The "fabric of space" cannot ripple like they say.
If you have 2 bowling balls on the surface of swimming pool water and attach them together and spin them -- yes, they will create the sine wave traveling ripple. 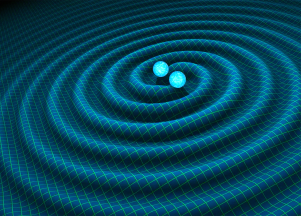 But if the bowling balls are underwater -- completely immersed in the water -- the traveling "ripple" will NOT be able to propagate (happen) and it will immediately fizz-out. There is no mechanism to keep the up and down movement going whilst under water.
Black holes and or neutron stars are also completely immersed in space-time. Space time is filling space -- everything is completely immersed in it.
Gravitational waves cannot be transverse ripples like those on top of water.

"Transverse waves cannot propagate in a gas or a liquid because there is no mechanism for driving motion perpendicular to the propagation of the wave." -- HyperPhysics

Transverse Waves -- RIPPLES -- can travel on the surface of a substance like water or on strings or threads.
Transverse Waves cannot travel underwater -- even Mr. Simple knows that.

The same thing goes for Space Time.
Space Time is all encompassing so there is NO surface for transverse waves to travel on.
If waves are traveling through space time they must be going directly through it -- immersed in it. But that is ok because Longitudinal Waves -- compression waves -- like sound waves -- work just fine
Or, is Space-Time made from string-like threads? (not the string theory type)
Yes, that is actually correct -- it is Quantum Thread Theory -- but gravitational waves must still be compressional. Space is a lattice-type thread particle network. The problem still exists though. A wave can travel fine on one thread but a wave is NOT going to be able to travel through an assemblage of threads (or strings). Think of a tensioned tennis net. You could pluck one thread and the vibrations would travel all through the net. You could also give the whole net an up and down sine wave / transverse wave type shake and the wave will happen and propagate. But if the net was a 3-D tennis net completely filling space you cannot create a transverse ripple-type wave. The 2-D mechanism is gone and you are immersed in 3-D space.
NOTE: The 3-D compression waves would still work fine in a 3-D tennis net or any other circumstances.
SPECIAL NOTE: You could still give the 3-D tennis net a finger-pluck and send vibrations all through the net (that's the way light works). But a large size ripple cannot happen whilst being immersed in the medium of propagation (that's the 3-D net in this case. )

If something is bending or curving or warping or gravitationally microlensing light -- it means light is a physical part of it.
Waves can only travel in a medium -- that includes light.
PG says cosmological red-shift can stretch Space-Time and thereby stretch photons in transit. If that is correct it would mean photons are traveling in space-time -- as a part of it -- and space-time is a medium. Something can only affect something else if it is in direct contact or it is a part of it.
The spiders web and moth are a good example. A moth can only be pulled apart by a stretching web if it is stuck in the web.
If a moth is doing a fly-by the web has no effect on it.
So space-time must actually be something -- a medium -- and there is a huge amount of it, completely filling space.

Gravitational waves are caused by Black Hole mergers and now Neutron Star mergers.
If there is a ripple -- the amplitude (height and depth of the traveling wave) must be somewhere around the same size as the object that created it. In the case of a neutron star -- that's about 20 kilometers. 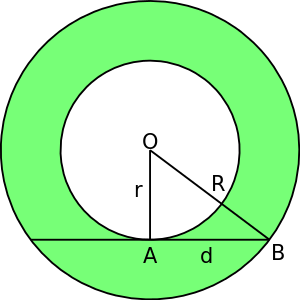 You can think of that as a CD or as a simple circle that keeps getting larger in radius but NOT in thickness -- the amplitude of the supposed ripple wave stays the same size as it travels.
After the merger; no more ripples will be created but the ones that are already traveling will keep doing so.
So, now the shape is like a huge ring -- like the planet Saturn has. But the ring keeps getting larger in diameter -- NOT in thickness.
So, the problem we have now is: there is supposedly a 20 kilometer height slice (it is called an Annulus) that has traveled unfettered for 1.8 billion years (that's an approximate time (ago) of one of the events).
The outer ring radius is 1.8 billion light years.
The inner ring radius is 1.8 billion light years minus the total time of the gravitational wave event. If the event were 10 seconds that means the width of the ring is 10 light seconds wide (that's just about a travel to the moon 7.69 times). UPDATE: another informed source claimed an event lasted one fifth (1/5) of one second. So that makes the annulus ring width about one fifth of a light second or only about one quarter of the way to the moon (0.25644407638 light seconds equals 76879.99999749994 kilometers).
And the height of the ring -- the wave amplitude -- is about 20 kilometers. That's about the 12.4274 miles.
What are the odds of black holes or neutron star merging and sending off the 20 kilometer ring that lines up perfectly with something 1.8 billion light years away? And it supposedly happened 5 or 6 times already. I'd say the odds are zero.
So, what's going on? How can LIGO be detecting gravitational waves? That's easy. The Gravitational waves are compression waves. They work something like regular sound waves do. Anytime there is a merger it shouts it out at the Universe and it goes off in every direction. (of course normal physics apply and there is the most compression directly in-line with the rotation). I think there might also be some sort of DNA-like twist shooting off directly above and below the event (on the axis of rotation)?

If any event happens in the Universe -- especially major events -- the whole Universe knows about.

Look at the rippling sine-wave merger picture again. If black holes or neutron stars were rotating around each other and spiraling in -- distorting space-time -- do you really think it would only send out a 12 mile thick slice (annulus)?
Gravitational waves are compression waves. But that's o.k. because compression waves would be detectable from any direction. And although the LIGO detector was designed for a different type of wave -- it can easily detect compression waves. (a compression wave is much easier to detect)

Remember: Space-Time does NOT have a surface like a pond.

So, Yes -- there are gravitational waves. They are compression waves. And now you know how they work.
Here is a regular thread tension formula...
Tension = velocity squared x mass / Length.
If we plug c in and rearrange we get the one-inch formula... TL = mc^2
http://www.mccelt.com/the-one-inch-equation-to-explain-all-physical-laws.php

Think of ocean waves.
If a bomb went off in the ocean it would create huge sound waves and be heard at the speed of sound underwater.
But waves created by it on the surface would travel much slower.
Same thing with gravitational wave - there are two types with different speeds

The particle itself would be just the grey threads in the picture (no color and a lot thinner of course).
It would fit perfectly inside of a dodecahedron.
Actual thread length is about one Ångström and it is fine enough where 10 threads (20 radii) could curl-up into the size of a neutron.