The thread unit itself would be just the grey threads (or strings) in the picture (no color and a lot thinner of course).
It would fit perfectly inside of a dodecahedron.
Actual thread (or string) length is about one Ångström and it is fine enough where 10 threads (20 radii) could curl-up into the size of a neutron.
The Universe Equation

"Particles follow a strict set of laws that dictate
how they can form, decay and interact" -- BBC Earth

Sorry Charlie,
If you claim there are particles: there would actually have to be particles. And that would mean there are about 18 different microscopic things that work flawlessly together -- just like clockwork to make even just one basic atom "gear" set.
If you have larger sized atoms: it would be like throwing more and more gear sets into the clockwork -- but that is ok because no matter what you throw in -- it will still work just fine.
How can an infinity of 18 different things (infinity times 18 different things) just happen to be here, know how work together as a group and also successfully work together as a group(s)?

How is that possible? It isn't...
Stuff cannot be made from what they call "particles."

If there are particles; this is equation of the universe:

The letters are the unique particles of the standard model.
One set would be an atom.
The number of atoms in the universe is for all intents infinity

Do you really think the 18 unique particles (times infinity) have always been here and just by happenstance they can work seamlessly and flawlessly together?
-- OR --
Did the 18 particles "pop" here out of nothing an infinite number of times? And yes, they still have their clockworklike abilities -- they work with more precision than a Swiss watch.
It doesn't matter which one you pick, they both require an enormous amount of belief, faith and magic to explain.
So, what is going on? Why do they mistakenly think there are 18 or more different particles? That's easy, when they collide protons they get shrapnel and call the different sized thread pieces "particles" because of the different mass / weight.
They are only getting schrapnel from the same thing and they give different amounts (schrapnel pieces) different names

~~~~~~~~~~~~~~~~~~~~~
UNBELIEVABLE COINCIDENCE
~~~~~~~~~~~~~~~~~~~~~
Whenever you see a picture of a proton / proton collision: you will see the paths the shrapnel took after the collision. It looks like stringy threads joined at their centers but there is actually nothing there -- it is only the paths.
But, if the collision paths in the picture were real (a substance) it would be a fairly accurate representation of the actual quantum thread unit.
So, what happened is: They collided protons in the LHC to try and find out what everything is made from and they wind up with what could be considered an accurate picture of the actual thread unit (what it would look like) but do not realize it..
The basic thread unit is 10 threads joined at their centers (that's 20 radii).
Note: 10 threads form the axis of the dodecahedron - an automatically forming Platonic shape. Nine would be loose. Eleven will NOT fit.
If you ball 20 threads you get a proton. And if you smash 2 protons together you get a collision of 40 threads. A lot of the pictures actually have that many threads in them (that isn't a coincidence though).

~~~~~~~~~
SCHRAPNEL
~~~~~~~~~
There is actually only one type of thing -- all the different "particles" are just different amounts of shrapnel threads. 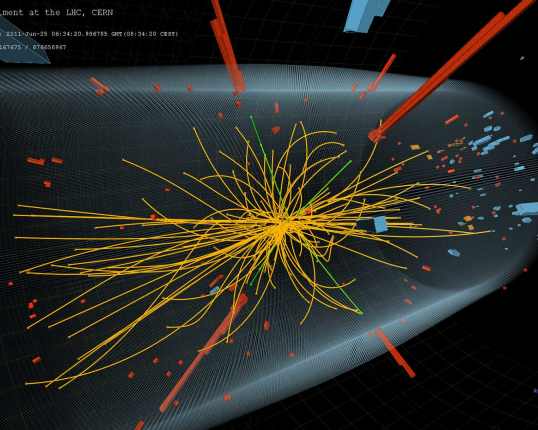 The threads also form a network.
Here is a regular thread tension formula...
Tension = velocity squared x mass / Length.
If we plug c in and rearrange we get the one-inch formula for gravity, light, energy and time...

Look at the s.i.m.p.l.e.t.o.n equation again. If the sub-atomic particle (standard) model is correct the only way it could have happened is by design -- like an experiment by an alien teenager -- there are all of these intricate mechanisms doing highly specific things. And there are an uncountable number of them -- all the exact same. That is like 18 different Tab A, Slot B (quantity x infinity). That is impossible to happen just by chance.
Even 2 different "particles" miraculously working symbiotically together is impossible.
What really happened is: they have the wrong model of the electron and the photon and it snowballed into a massive amount of incorrect and bloated explanations to try and explain previous misconceptions.

Quantum Thread Theory on the other hand works automatically (not the string theory type). If you pluck a thread it will vibrate. Quantum threads can twist together and stay connected. It is all stuff that works automatically.
It does NOT solve the creation problem though. The quantum threads have either always been here - OR - they were created at some point in time

NOTE: Does that mean "particle model" proves God? Nope, you are unbelievably wrong.

sym·bi·ot·ic
/ˌsimbīˈädik/
adjective BIOLOGY
● involving interaction between two different organisms living in close physical association.
"the fungi form symbiotic associations with the roots of plant species"
● denoting a mutually beneficial relationship between different people or groups.
"the reader can have a symbiotic relationship with the writer"

● 1. Biology A close, prolonged association between two or more different organisms of different species that may, but does not necessarily, benefit each member.
● 2. A relationship of mutual benefit or dependence.

p.s. Quarks must be "tracking" the positions of moving "electrons" and also keeping them at a certain distance just like a Star Trek tractor beam by exchanging (shooting) photons at them. That's dependence.

QUESTION: How is that possible?
ANSWER: It isn't. If you make a list of everything they say is happening - OR - everything known for sure is happening in an atom: i.e. electrons held and tracked in different orbits and at different distances, nuclei held together, emission / abortion spectrum, bonding, store and release energy, etc. The particle model is completely incapable of achieving it.

NOTE: One of the proton U~D~U quarks (probably the "D") is also the one that is shooting photons at electrons because it is a one-to-one ratio, one proton has one "D" quark and it shoots at and tracks one electron - but - the two neutron "D" quarks are NOT? They are just duds? Why?
There isn't anyway to make the model work and that is ok because that is what happens when something is completely and unbelievably wrong.
All of the quarks supposedly shoot gluons at each other but it turns into even more of a nightmare when you try to explain how some of them must also be shooting at the other protons / neutron in a nucleus.

"Stuff" - and that includes everything - can only be made from quantum threads.
You can expand them into quantum spiders web (but in 3-D )
You can ball them up into matter.
And with tension: they can vibrate as energy. TL = mc^2

Everything is made from only one thing - quantum thread. There are only different configurations.

Also, stuff cannot be trapped nor held in place unless there is an actual physical mechanism doing the trapping.
The "force carrier" is the worst thing. A pulling "force" cannot travel on a particle - by itself - through empty space. That is NOT going to happen.
No matter how much everyone want to believe it - things CANNOT work by magic.
Nothing spooky, no ghosts, no magic.

Here is a link to the whole theory...
http://www.mccelt.com/the-one-inch-equation-to-explain-all-physical-laws.php

The thread unit itself would be just the grey threads in the picture (no color and a lot thinner of course).
It would fit perfectly inside of a dodecahedron.
Actual thread length is about one Ångström and it is fine enough where 10 threads (20 radii) could curl-up into the size of a neutron.